In 1942, a somewhat fanciful and morale-boosting film paying homage to the Spitfire’s designer, RJ Mitchell, and his iconic fighter was made at Ibsley airfield in Hampshire. Starring Leslie Howard as Mitchell, and David Niven as a former RAF test pilot flying fighters during the wear, the flying and opening scenes involved real fighter pilots – including a number of the Few whom I knew. Amongst them, playing ‘Hunter Leader’, was Squadron Leader Christopher ‘Bunny’ Currant, CO of 501 Squadron – pictured here (centre) with another of the Few, David Fulford of 118 Squadron, and Howard on set.

Bunny had flown Hurricanes during the Battles of France and Britain, earning a DFC and bar. By June 1942, he was a wing leader, his final score 15 enemy aircraft destroyed. 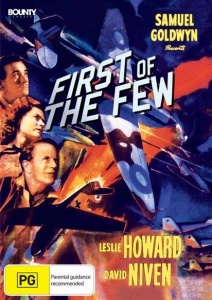 Having left the RAF in 1949, Wing Commander Currant wrote poems, to assuage his PTSD, some of which I published along with his memories of the violent events inspiring them in ‘A Few of the Many’ (1995). Bunny is also pictured at the launch of ‘Through Peril to the Stars’ in Malvern (1993), at which event he presented me a tiny Spitfire lapel badge – which I still wear proudly today. Sadly, his brother was killed during the war, a loss Bunny felt keenly and spoke of frequently. Lovely man, left us in 2006.