Special guest Squadron Leader John Peters, the former Gulf War POW and co-author of the best-selling ‘Tornado Down’, perfectly set the scene with a hard-hitting and evocative video of his own story – leading perfectly into two presentations by Dilip, firstly ‘Spitfire Down’, concerning Spitfire pilots who failed to return, then ‘Forgotten Heroes of the Battle of Britain’. 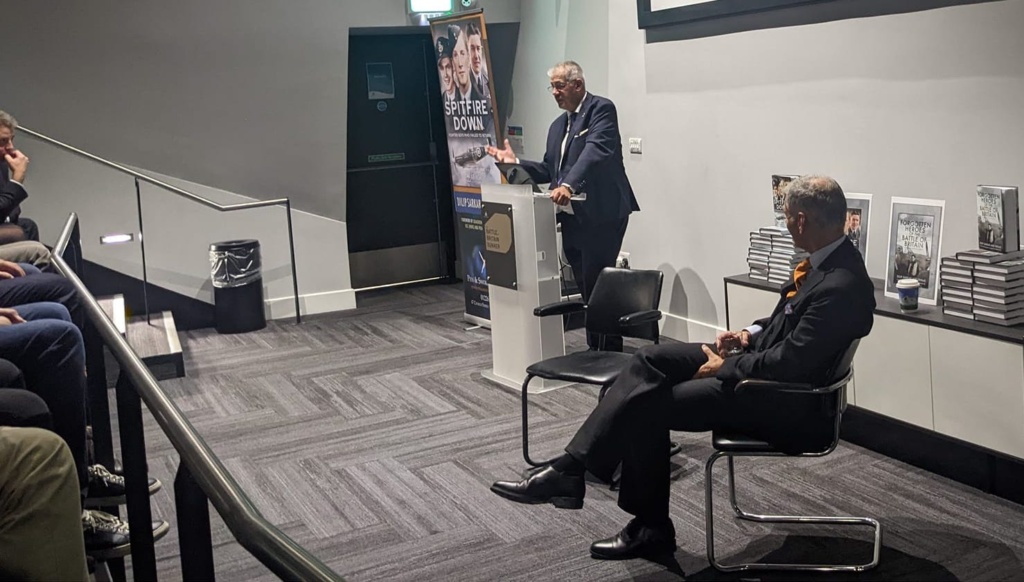 Dr Rachael Abbiss, Military History Curator at The Bunker, said ‘We were privileged that Dilip has chosen The Bunker to hold this prestigious event, and the whole thing was superb, both the day for the families involved on Saturday, and our visitors on Sunday. We look forward to working with Dilip and Pen and Sword to host future events, which are really helpful in promoting The Bunker’.

The Battle of Britain Bunker and visitor centre, which opened in 2018, is a superb museum and state-of-the-art conference facility; more information here: –

‘It was fascinating to be immersed back into RAF history, and a privilege to meet John Peters so many years after recording his “failed to return’” that morning back in 1991. More widely, you’d certainly gathered an interesting group, reflecting the role you’ve played as a magnet for first hand stories of the Battle of Britain for so many years. I sense from the social media posts that the event was what you’d hoped it would be; it certainly seemed a great success, and I hope that Sunday was equally enjoyable for you. The venue was just right’.

‘Just a quick note to express my sincere thanks for a superb day yesterday and to again offer my congratulations on your extraordinary achievement in having fifty books published, especially given the time and effort in researching the subjects.  Incredible, especially given how readable the books are and the new information you bring into the public domain.

‘I trust the public event goes equally as well and I look forward to your seven-volume masterpiece on the Battle of Britain.   In researching just the air fighting of 15 August 1940, I am totally on board with your views about the myths and factual errors that have crept into so many accounts of the Battle so good luck with the project’.

‘Congratulations once again on the publication of your 50th book and thank you for inviting us to share this special day with you.

‘It was a splendid event yesterday which we found really informative and engaging.  Danuta and I enjoyed the day immensely’.

‘Just a quick note to thank you for the invitation to Saturday’s event which I though was excellent’.

‘Your event yesterday at the Bunker was just superb along with all the other staff involved, looking forward to your other publications and am already looking out for “I had a row with a German”!’

Gay May, niece of Sergeant Geoffrey Painting, the youngest pilot ever killed flying with the RAF, and featured in ‘Spitfire Down’: –

T’hank you so much for the moving tribute to my Mother’s brother Geoffrey Painting in your book and at Saturday’s book launch in Uxbridge.  It was an excellent day and we enjoyed the depth of your knowledge and insight into events of WW2 and more especially individuals and their contribution’. 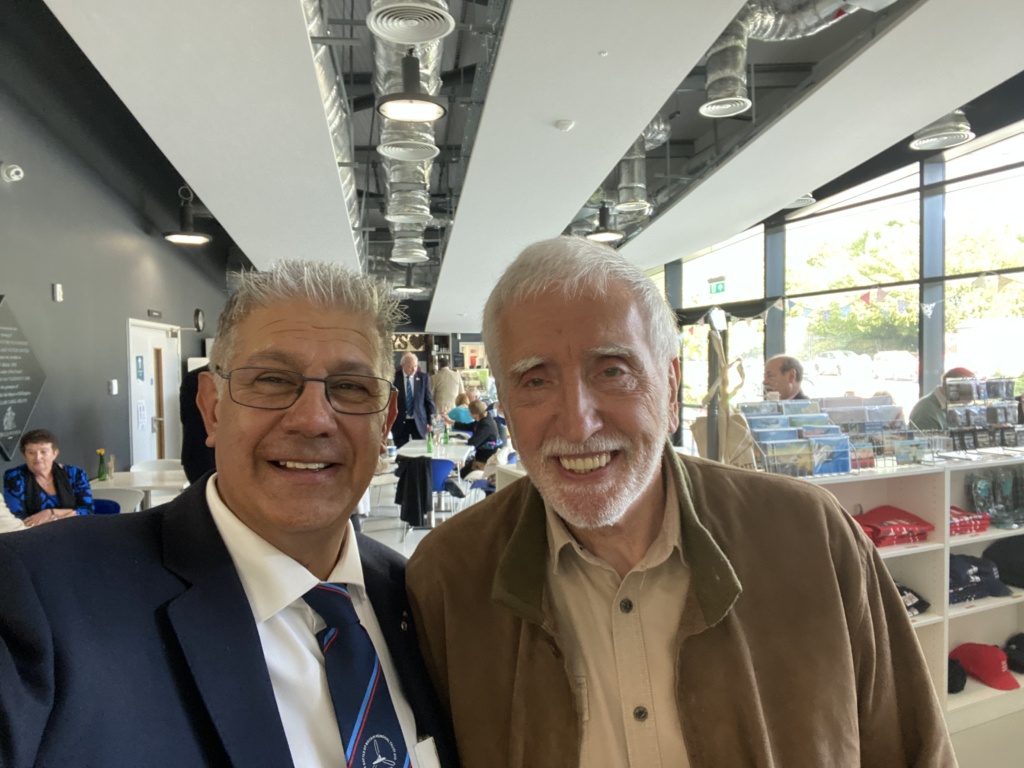 ‘A wonderful day on Saturday and my first visit to the Bunker’.

‘One of THE best days for a very very long time – Battle of Britain Bunker morning and early afternoon to celebrate Dilip Sarkar’s 50th book – met the families of some legends and heroes of the RAF, amongst them Ronald Kellett, JB Nicholson VC, Geoffrey Painting, as well as John Peters’.

‘We really did have the most amazing day at Uxbridge yesterday, where we met and spoke to some inspirational people.

‘Dilip Sarkar, as well as being an outstanding author, is also an exceptional public speaker, his presentations are enthralling and gripping from the off.

‘His passion for the subject and the people he writes about is on full view for everyone to see, he holds nothing back. Furthermore, you cannot fail to be motivated and inspired by his boundless enthusiasm and utter professionalism. His unique style and delivery is captivating from start to finish.

‘Well done on your milestone 50th book, you are Indeed a legend. Your contributions to this fascinating subject are without a doubt, unequalled in my humble opinion.

‘On a personal note, for us to be invited along Saturday to celebrate the publication of his 50th book was very special.

‘To hear my wife, Michelle, who traces people for Dilip,  mentioned in such high regard, a number of times throughout the day was heart warming. Although it has to be said Michelle takes it all in her stride and is very humble about her contributions. For my part, I’m extremely proud of her achievements and involvement with Dilips work.

‘I cannot finish without mentioning The Battle of Britain Bunker itself. It is most definitely worth a visit, great venue and superb staff. The tour around the underground bunker control center was amazing. It really was like traveling back in time. It is, as it was when allied pilots were fighting for this country’s very survival in the sky’s above’. 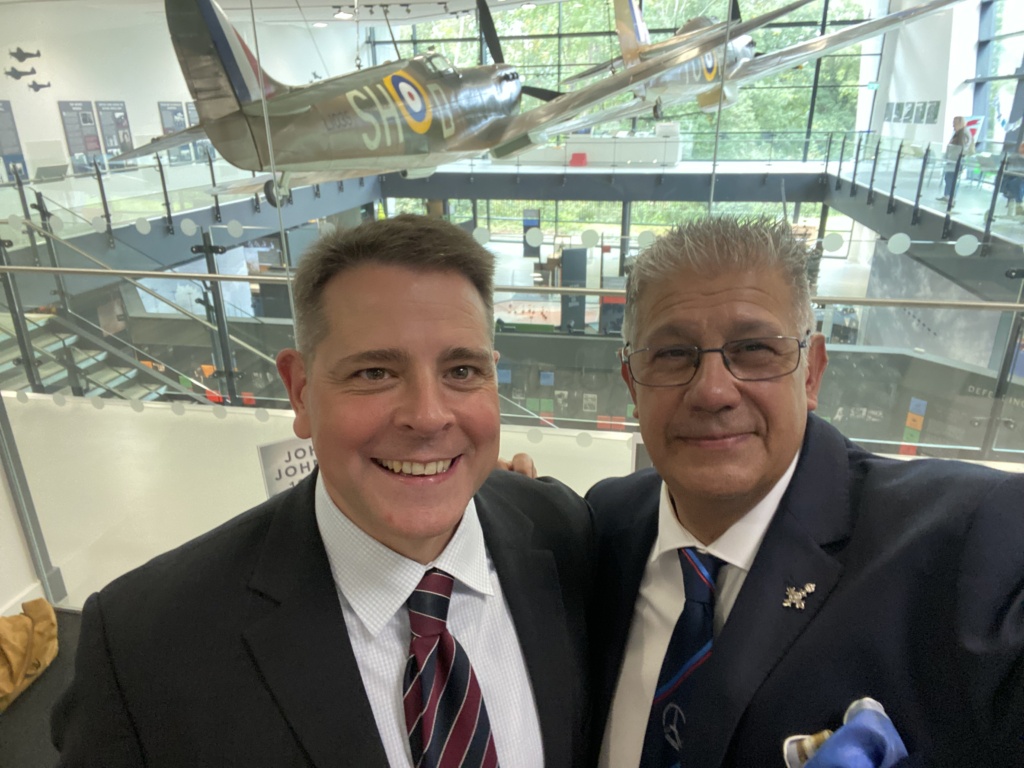 Dilip with Martin Mace, his great friend and Commissioning Editor at Pen & Sword – who he keeps very busy!

‘A huge thank you to Dilip Sarkar Mbe, Pen and Sword Books and Battle of Britain Bunker, Uxbridge for a cracking event at the weekend.
It was incredible to visit such an important historic site for the first time and descend down the steps into the wartime operations room at Uxbridge. You could just sense the history and drama that once took place.
‘Also, fantastic to meet Martin Mace of Pen and Sword Publishers who we are working with to bring my second book “One of Our Own’”to life.
Great to see so many familiar faces and will definitely be back soon’.

‘Congratulations on the release of your 50th book. What a milestone!! Thank you for inviting Martin and I to The Battle of Britain Bunker for your inspirational presentation bringing to the forefront and back to life the most personal and fascinating stories of Spitfire pilots that otherwise would never have been discovered. You have uncovered these through your perseverance and incredibly hard work, a treasure trove of stories that otherwise would have remained in dusty attics and drawers and lost over time to obscurity. A day spent meeting inspirational people and The Battle of Britain Bunker is a ‘must’ for all of you that love and appreciate history’.

‘Dilip, what a great weekend for you, Sue, your family, and your team as you celebrated the anniversary of your 50th book. Julie and I as you know were present on Saturday and what an experience it was. To listen to your passion and what the lives of those who sometimes get forgotten mean to you. War has been largely instrumental in the formation of nations and cultures as we know them today but to hear about these through a historian who presented a fantastic account left us both amazed that we were part of making history. Through your presentation, we can all have a better understanding of the present and its nuances by looking toward the past. The day was also made special by the support you had from John Peters and what a pleasure and honour it was to have met him and to hear about his experience and what the occasion meant to him and to those other family members’.

‘A brilliant day, what an insight!’ 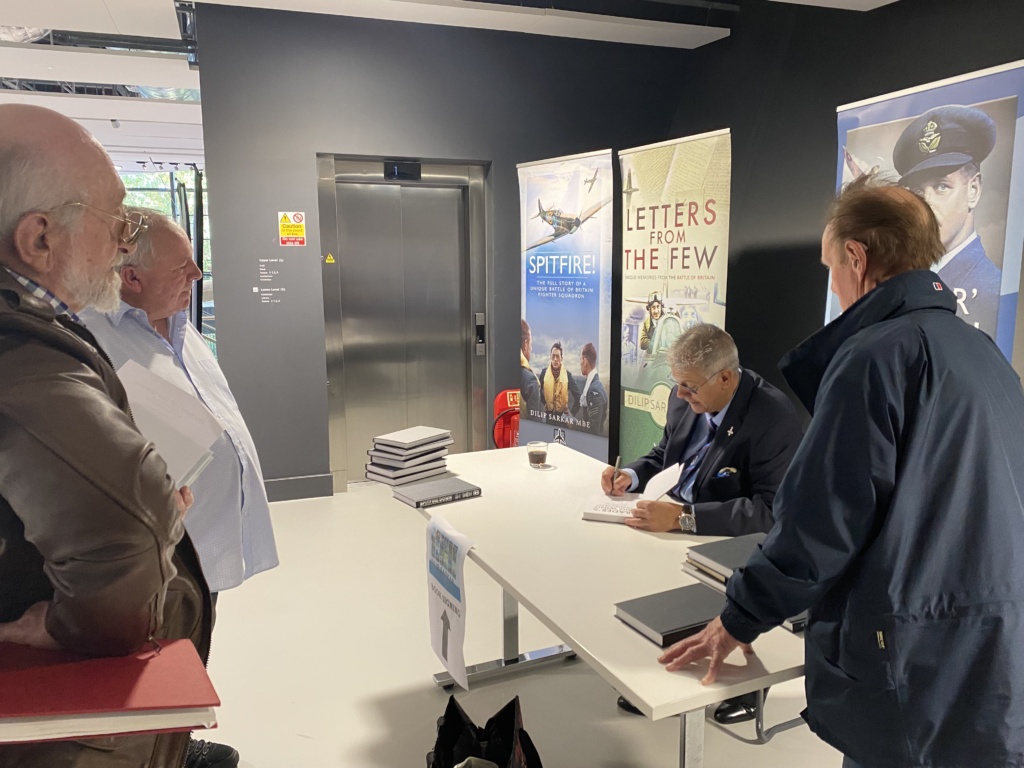 ‘Yesterday I had the pleasure to have been invited to a very special day at the Battle of Britain bunker at Uxbridge.

‘To celebrate my friend, historian and author Dilip Sarkar’s 50th book – in itself a fantastic achievement – and the stories regarding the airmen and their part they played in not just the Battle of Britain, but other theatres of WW2 is amazing and humbling. I was blown away at the work that goes into the writing of these books, and the research that uncovers the ultimate price some these young men paid for future generations.

‘I have to say that Dilip is a fantastic public speaker, and his enthusiasm and passion for writing the books and keeping history alive is truly astounding.

‘We both grew up in the time when Airfix models,playing soldiers, and reading Commando magazines etc were the name of game as you so rightly said yesterday however as you get older and look back it wasn’t a game to those that were there.

‘A great day Dilip and looking round the bunker was a fantastic insight to this dark days of WW2’. 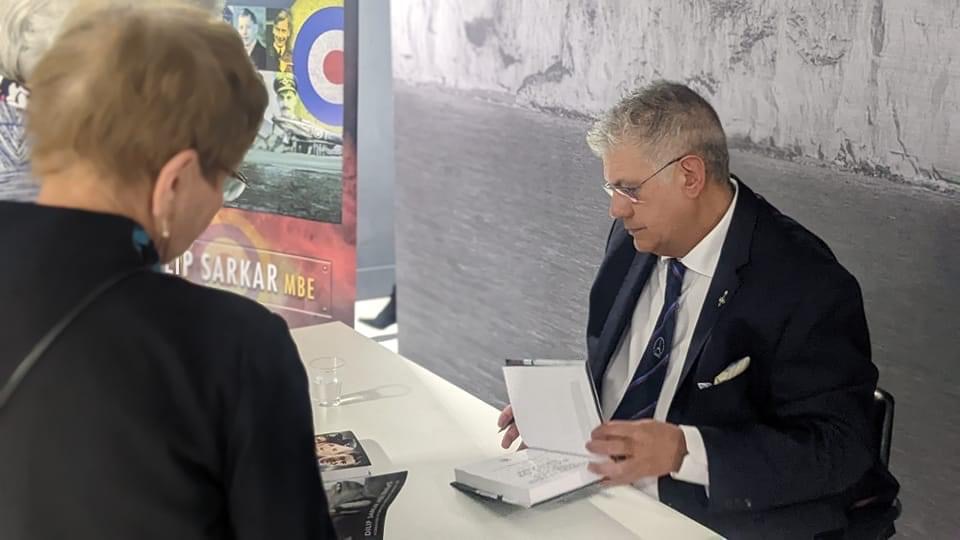 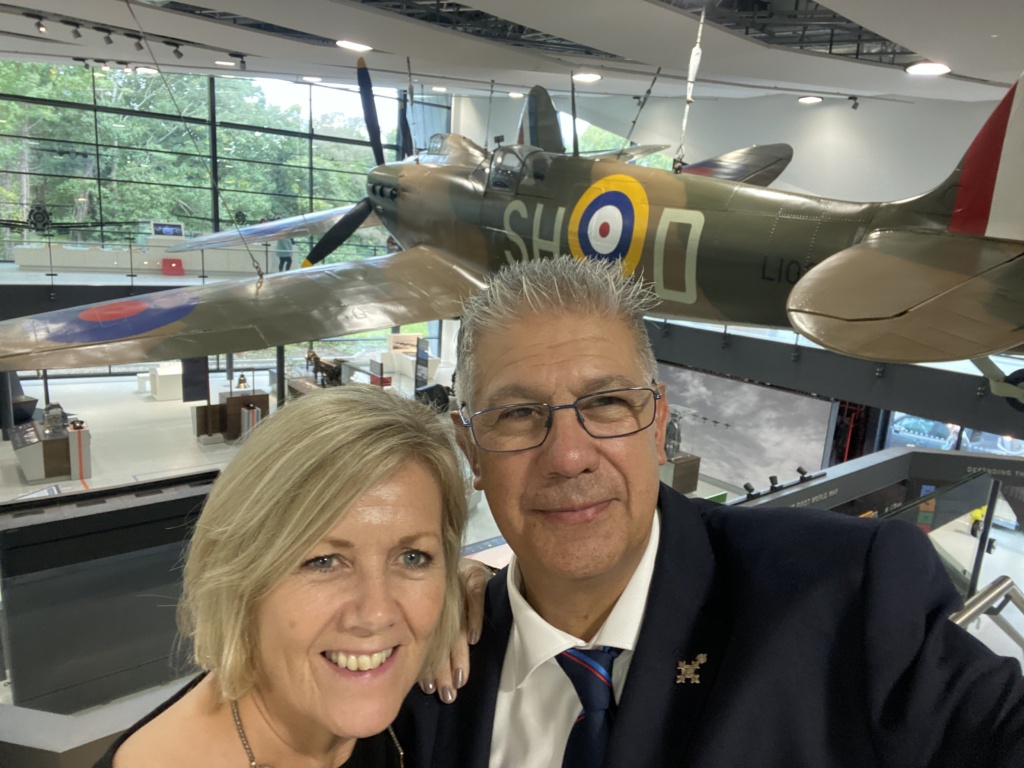 Dilip and his long-suffering partner, former detective chief inspector Sue Bradshaw – who keeps him in order! 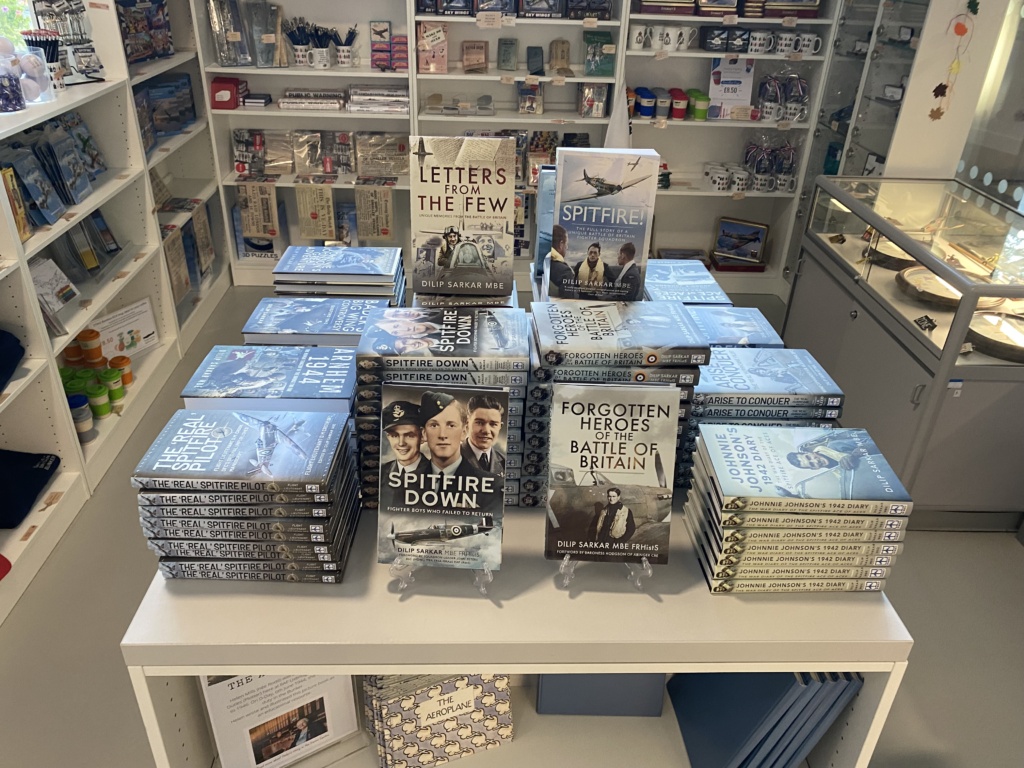 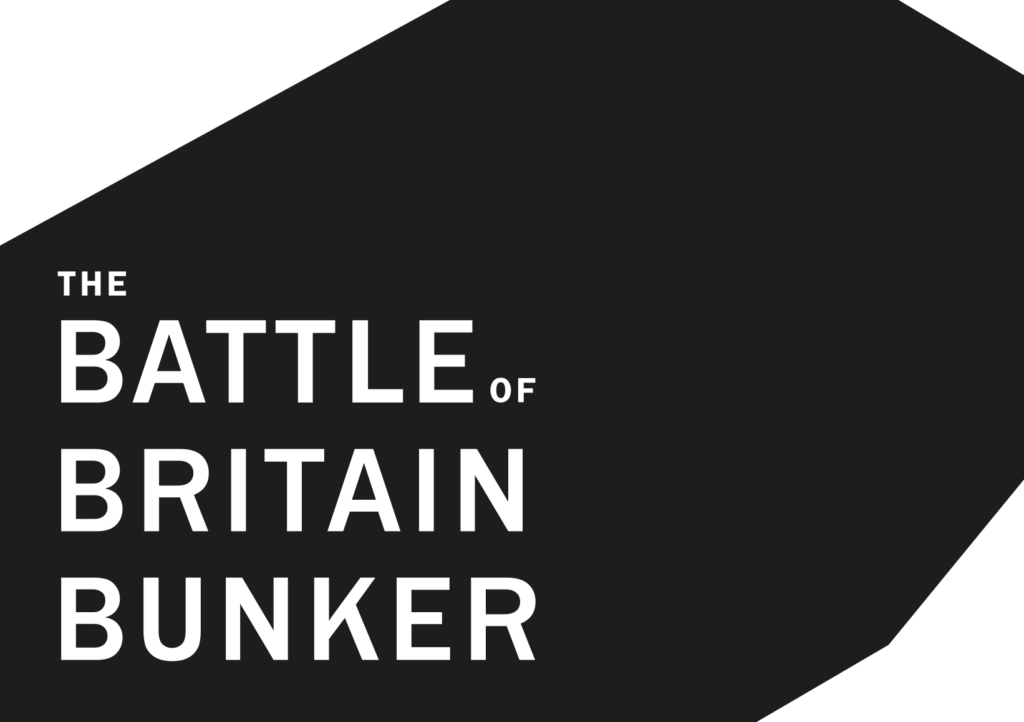